I had a couple of figures left from my original Plastoy set, they will do for a village scene (have to build a gallic house next I suppose). 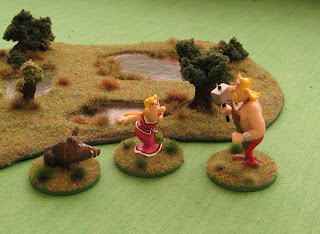 Email ThisBlogThis!Share to TwitterShare to FacebookShare to Pinterest
Labels: gauls

I decided to make a few more gauls to painted, then got into sorting out the rest that I had - its taken a few sessions over the last couple of days - now all done. To avoid too many same pose figures, I did arm, shield and helmet variations, involving swaps of bits held together using 'pin's - even gave a couple roman heads as captured headgear. 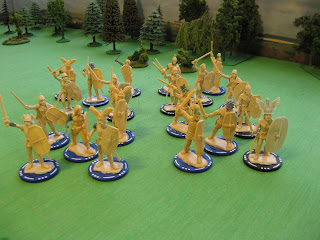 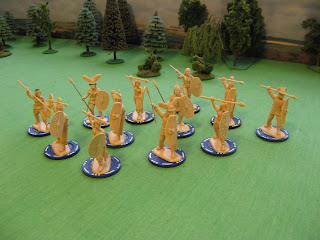 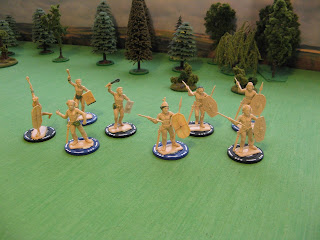 Slingers and javelin men
With the gaul command I finished and those shown above I've now used up two boxes each of Italeri and HAT gallic warriors. I prefer the Italeri figures they have easier conversion possibilities.
Posted by tidders2 at 6:10 AM 2 comments:

Email ThisBlogThis!Share to TwitterShare to FacebookShare to Pinterest
Labels: modelling

Gaul command group painted up now, with Asterix and his chums at the back. 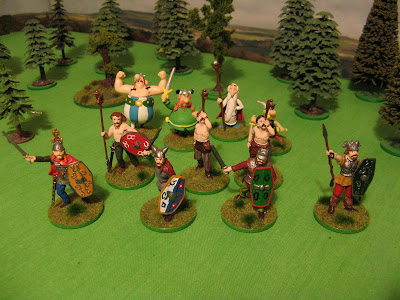 I put some static grass on the bases and the odd grass tuft, this seems to improve the look of the finished figures.  I also sorted out some romans from the Asterix olympic set, I repainted the emperor and one of the civilians and left the rest as they were - put them on suitable bases - from left to right: governor's daughter; governor; governer's assistant and two of the governor's bodyguard. 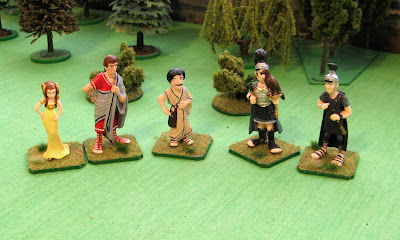