I've been collecting bits together for the chariot for a while, having bought another box of Italeri gauls I have now got some suitable figs to convert - I need to make up the chap holding the reigns. Here is the first assembly of the chariot ... 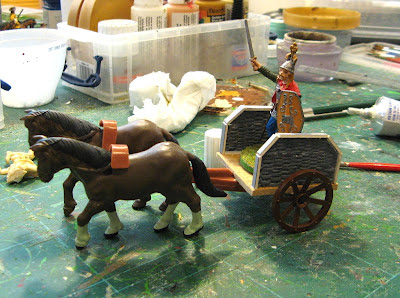 Also managed to find some storage boxes with just the right depth to hold the gauls, romans and accessories (Very Useful Box -11 litre).. 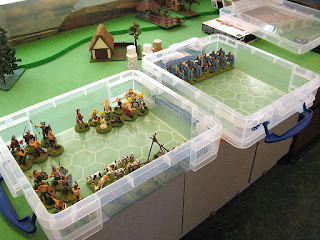 Finally finished my unit of roman auxiliaries; worse bit to paint was the sandals ! the shield was awkward, I chose black for the design and use a combo of paint and fine black marker pen .... 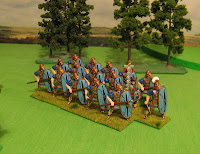 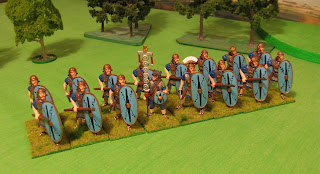 formed up for battle

in skirmish order
Posted by tidders2 at 6:31 AM 2 comments:

Email ThisBlogThis!Share to TwitterShare to FacebookShare to Pinterest
Labels: romans

While considering what shield design to use for my roman auxilaries, I decided to sort out the legionary shield (scutum) design while I had a idea of how to do it - I made a template of the shield with a hole for the shield boss using a a post-it, then found a nice image on the internet of a roman shield and sized it up to print out on some sticky labels. Below shows a shield with stick-on label applied.... 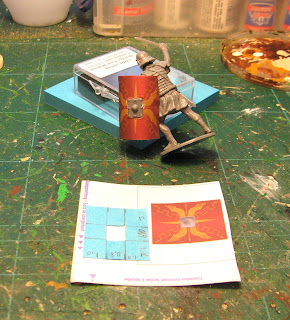 After applying the sticky labels, I'll seal the shield surface with some acrylic satin varnish.
Posted by tidders2 at 11:37 AM 3 comments:

Sorting through the animals I use for my 40mm figs, I found some goats which are really too big and are really for 54mm so they've been re-based for use by the gauls/romans as needed; I also had a couple of spare geese too.. 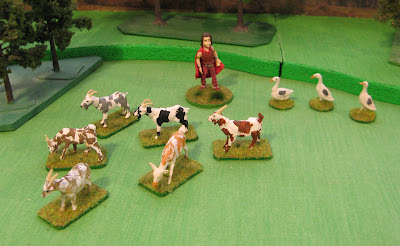 I buy bags of animals, at Car Boots sales and Toy&Train collectors fairs, to get maybe one item I want - anything else that may be useful I keep, the rest I donate to charity. So delving into my 'maybe useful' pile I found three 'wild boars'. Something for the gauls to hunt for their feasts .... 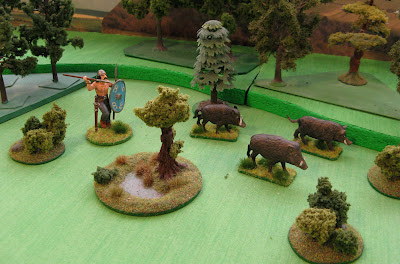 While I was in the mood, I thought it would be a good idea to see how a Call-to-Arms roman conversion to holding a pilum would come out before I made any more pilums; first attempt shown below (orginal figure on left and conversion on the right) 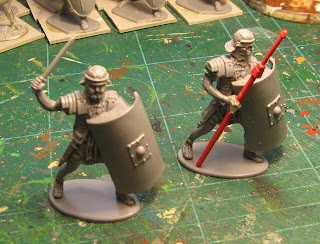 I was getting my unit of auxiliaries ready to paint. I had prepared/converted some HAT triarii and had them all armed with swords. I wasn't satisfied with them - two problems the head/helmet didn't look right and a lack of spears.

The first thing I did was to give them some new heads taken from spare Call-To-Arms romans; then made some spears from cocktail sticks and green stuff  - tryouts with spears below 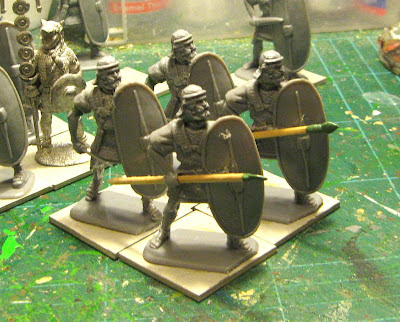 the spears armed men look OK so I've decided to arm half the unit with spears.  While I was thinking of spears, the Call-To-Arms roman legionaries are all brandishing swords - so pilums are needed (sorry don't know the right latin plural for pilum). First try shown below of making a pilum from wire spear top and cocktail stick compared to one I got in the BMC romans set I bought recently 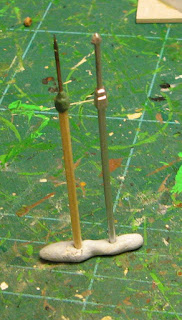 I'll probably make enough up for my legionary unit(s) to be half armed with pilums.
Posted by tidders2 at 6:05 AM 4 comments:

Gauls, Civilians and Romans - a selection

Just completed a nice batch of varied figures for this project: 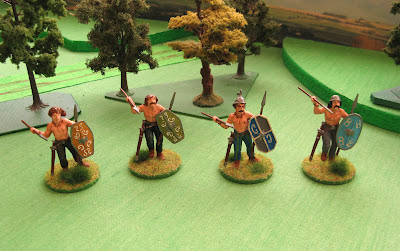 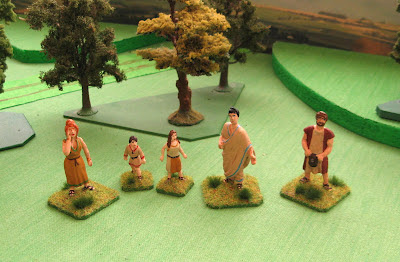 and finally to get the roman military started, a couple of ballistas and crew  (Irregular Miniatures 54mm) 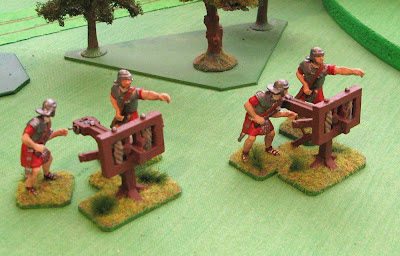