A couple of trumpeters from the Marx chariot/arena set, with BMC Roman heads. 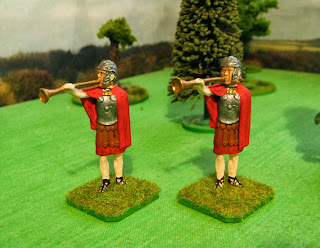 Used up the 'good' pose Toyway Heroic roman legionaries in lorica segmenta, modified to use by home made pilums, who are they looking for ? 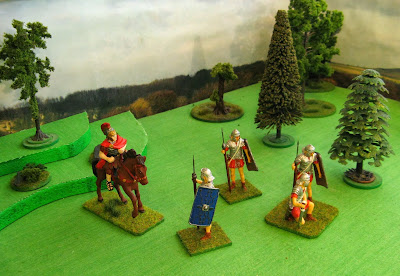 Officer:  Any sign of him ?
Legionary: No sir
Posted by tidders2 at 8:25 AM No comments:

Email ThisBlogThis!Share to TwitterShare to FacebookShare to Pinterest
Labels: romans

getting ready for a snack ...

The purchase of the Timpo Toyway romans has got things moving for the romans on this project, so I'm getting wound up to work on the legionaries that are waiting in the painting queue.

I've been working my way through the Timpo Toyway figures I've obtained; there were a couple of kneeling chaps, I though a head swap for one and quick conversion for the other to hold a stick would be  a nice addition to a camp fire scene ... 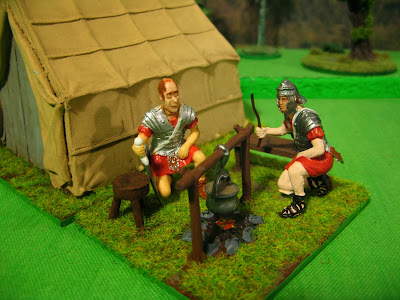 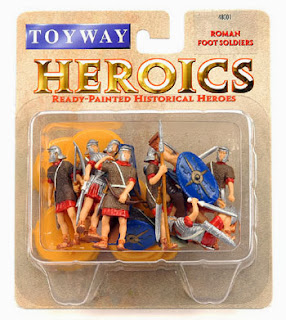 the pack contains 10 different poses, which includes one archer reaching for an arrow. I managed to obtain a couple of lots of these (unpackaged) from Ebay, they are a bit bigger than 1/32. From these purchases I only had three archers, so I converted three soldiers holding swords in left hands to archers, and did conversions to make two firing. The arms are from some medieval archers,  bows made from florist's wire...

The little unit of archers - work left to with some green stuff...then onto painting... 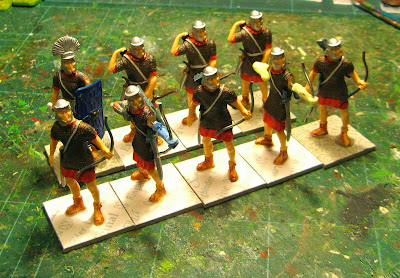 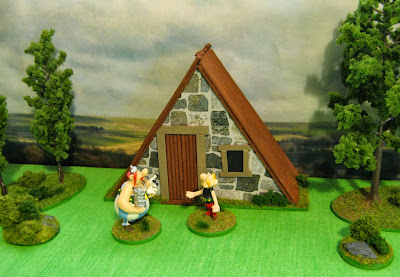 Managed to get a Horrible Histories Boudica, with a little additional paintwork and a replacement spear she's read to take command of the celts/gauls; shown below with a converted scalectrix female spectator and a converted kellogs Little John. 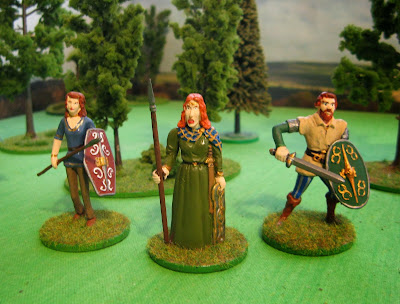 What to call her ? was thinking of something along the lines of Cartimandua (an actual 1st-century queen of the Brigantes) - perhap Gargamantua as she is a little on the larger side.
Posted by tidders2 at 10:09 AM 1 comment:

Email ThisBlogThis!Share to TwitterShare to FacebookShare to Pinterest
Labels: gauls

A busy week, finishing working on scenic items and the last in a small flurry of posts today - the Roman Villa. For its construction I've made extensive use of printed paper sheets. The two buildings shown in the previous post and some walling I finished recently are used with the villa - here 'tis then 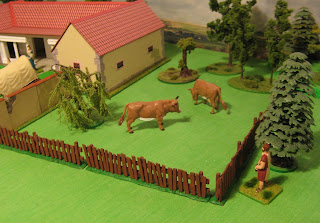 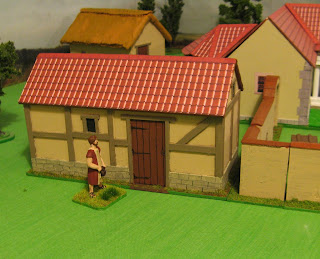 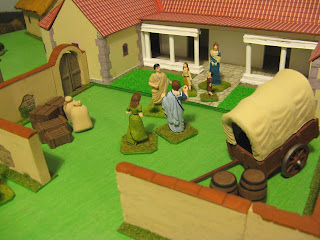 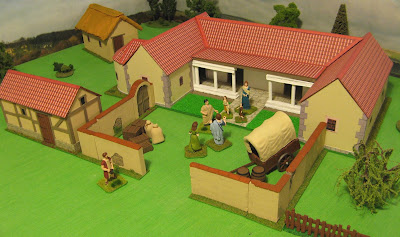 Couple of buildings (one Roman, one Generic)

Two buildings finished. Firstly a roman building which could be if viewed from one side a small house or from the other side a small barrack or stables 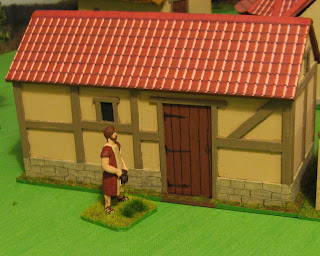 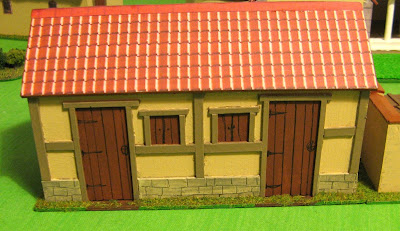 Next a generic building - possibly a barn or store house: 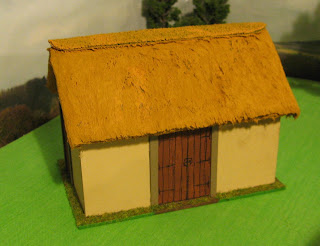 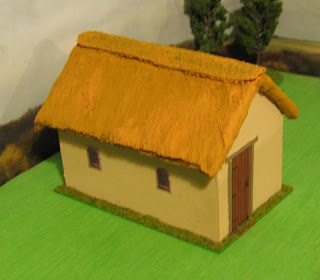 made up some basic shells for three celtic round houses, used some pape-mache round boxes from Hobby Craft, the lids will form the base of the roofs (and will be removable)

Finished off the wattle fencing sections, shown below with a donkey and some Britains cows 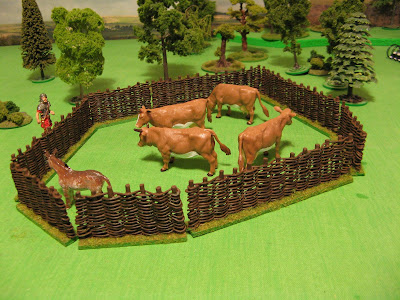 Yesterday decided to get on with the villa - the final item has to be capable of use with 40 & 54mm figs - so maybe a bit smaller than would be right for 54mm but a bit large for the 40mm. First measured up and added the main walls in foamboard, with doors cut out. 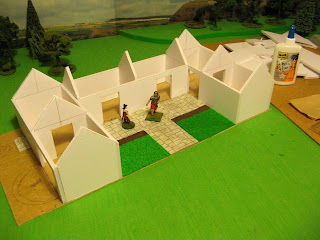 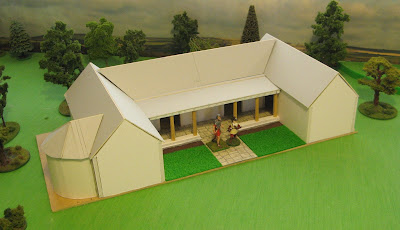 That's all of the roman buildings initial build done, so I've got the villa and two others made up which were shown in the previous post - onto the detailing for them next. I may put a basic interior in the villa - some mosaic floors and simply decorated walls.

What about the gauls/celts ? well eventually I'm aiming to build 3 huts and one low relief building plus a pallisade to go in the corner or one of the short sides of the gaming table.
Posted by tidders2 at 7:59 AM No comments:

Making up some more buildings for the romans, firstly a couple of small generic ones, carcases done, one with possible layout sketched out on the side .... 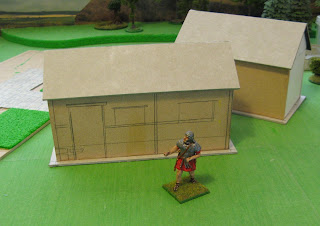 and also the base borad for a small villa; made this on a scrap piece of MDF, have laid out the outline - I'm going to try and make it with lift off roofs (maybe). 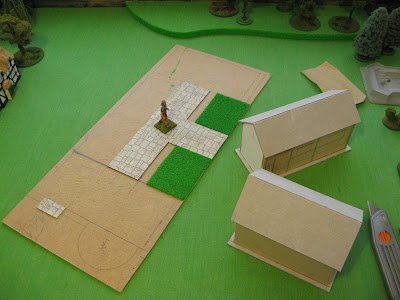 Working on walls for the last week or so, firstly some resin wall sections 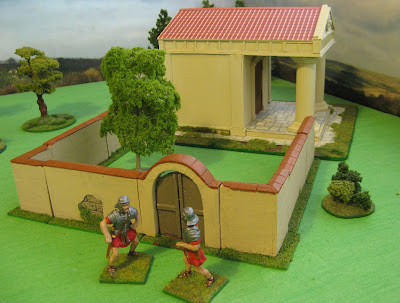 and also some Britains wall sections; I had quite a few of these so I made them up into some corners, singles and doubles - height wise they are a tad low for 54mm but OK for 40mm; 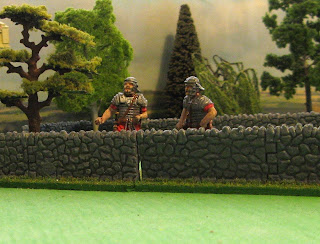 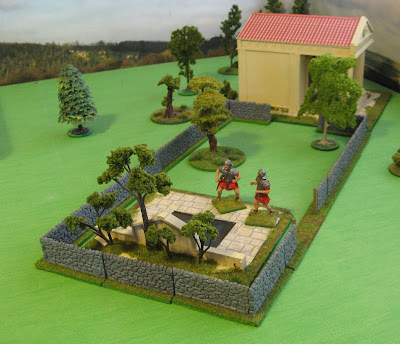